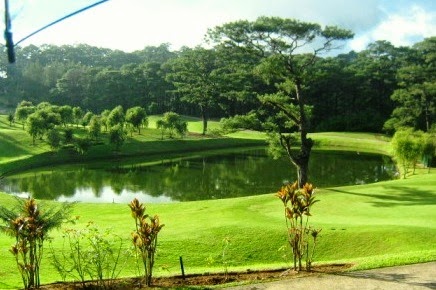 Baguio City - A child drowned in a lake in Camp Johnn Hay, Baguio City, while they were trying to catch some frogs last night.  The child, Kim Galvan Mariñas, 14, was a resident of Barangay Baguio Country Club Village and a Grade 7 student of Baguio City National High School.

His body was found around 9:30 am today after a search and retrieval operation was conducted by the Baguio Fire Department, police, and ohter volunteer groups.

Mariñas' companion, Dominique Mabanta, 10, a resident also of Baguio Country Club Village, is currently in stable condition at the Baguio General Hospital.  Mabanta was rescued last night after he was pulled out of the water by a photographer, Gil Olarte Orebelo, who happened to be at the area at the time of the incident.

Another child, Ed Christopher Mabanta Velasco, 12, was unharmed because Velasco immediately left the scene in order to call for help.

From initial reports, the three entered the golf course of Camp John Hay around 5:30 yesterday to catch frogs.  They approached a lake which was 12 feet deep and 150 meters wide.  While they were catching frogs, Galvan slipped and fell into the water.  Mabanta tried to pull Galvan out of the lake but also slippped and fell in.

In helping the children, the photographer was only able to help Mabanta as Galvan drowned.  An immediate search operation was conducted but Galvan's body was only found this morning.