How To Spoil An Endorsement By Vicki Belo 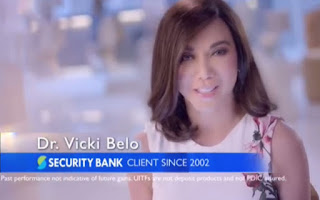 Word has been out in the circle the EastWest bank is now taking over the retail banking business of Standard Chartered.  This means saying goodbye to Priority Banking of Standard Chartered.  Over at HSBC, they said that they would be closing down trust services and that clients would have to look for other banks to receive their instruments and investments.  At Citi, they've also closed down their Alabang branch.

Tata said she was shopping around to look for a bank to take on what she's pulling out from Standard Chartered and HSBC.  Her knee jerk reaction was try out Security Bank.  She had two good reasons to try Security Bank.  One of her friend's sons is a top executive there.  Second, she was always an avid follower of Vicki Belo.  So when all these ads started coming out two weeks ago with Vicki Belo and Megan Young endorsing Security Bank, it was just a matter of time before she would succumb to the advertising.

A few days ago, she visited the main office along Ayala Avenue.  Who would not be familiar with Security Bank building when the Philippine Sugar Millers Association is perched on the upper floors of the same building.

Tata talked to one of the ladies among the desks which would be the equivalent of the new accounts counter.  Lady was utterly clueless about referring a Relationship Manager.   What?!!!  This is what Megan Young was bragging about and she's utterly clueless.  All she does is say, "Ma'am, can I get your number and I'll let the Wealth Management services call you?".  Security Bank's Wealth Management is just a few floors upstairs.  Least the girl could do was call for someone to come down, or escorted her upstairs.

The long and short of it, Tata left.  She still believes and admires Vicki Belo.  She just thinks Security Bank's offering doesn't match up to their advertising.