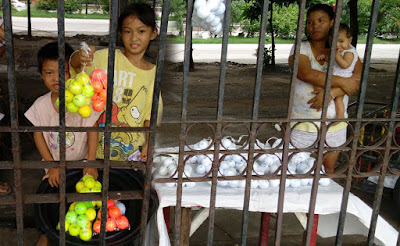 MANILA, Philippines - While the rest of the metropolis are preparing for Christmas this Friday, eight-year-old Ana (not her real name), and her five-year-old brother may not have much to look forward to.

Ana is an entrepreneur in her own small way.  She gathers lost golf balls around the Intramuros golf course in Manila, washes them, and sorts them into plastic bags selling them at P200 to P250 per dozen.  Sometimes, she gets to collect brightly colored balls nd sells them at P300.  This little enterprise of hers positioned outside of the fence near the 17th hole of  Club Intramuros brought food on the table for her and her family for a number of years.

All of that changed last week when on Monday, December 14, 2015, the golf club and all other businesses in Club Intramuros was shut down in the aftermath of the accident that saw a luxury car being hit by a stray ball coming from the 12th hole.

Caddies and employees of Intramuros are now pleading for help after the recent temporary closure order by management due to the stray ball accident which happened on Saturday, December 12, 2015.

The wayward ball struck the windshield of the luxury car, a Jaguar, and became reason for management to stop the operations of the golf club, leaving hundreds of caddies, umbrella girls and part-time employees jobless and now facing a bleak Christmas.

The club is reportedly bent on not resuming operations unless protective nets are in place on holes 2, 3, 4 and 12 which are considered problem areas of the course that snakes around the famed Wall of Intramuros.


Vehicles being hit by stray balls have happened in the past at Intramuros but management felt the recent incident was serious enough to put protective measures in place before allowing players to tee off again.

For the meantime, the caddies, employees, and Ana would just have to look for other sources of income.

The Intramuros Golf Course, also known as Club Intramuros, is operated under the Tourism Infrastructure and Enterprise Zone Authority (TIEZA).