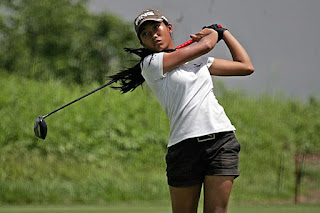 Last year Bianca Pagdanganan, as a freshman, became the first Gonzaga golfer to compete in the NCAA Championship. She also would finish the season with the best single-season stroke average in school history. All the reason to believe this was just the beginning of big things.
Big things indeed.

Now a sophomore, Pagdanganan of Quezon City, Philippines, collected her second career victory and first of the season at the Pizza Hut Lady Thunderbird Invitational on Friday. She would post an 11-under 61 for an NCAA record for lowest 18-hole round.

Pagdanganan, ranked No. 170 in the Golfweek/Sagarin rankings, would finish the 36-hole event with a 14-under 130 total being played at the par-72, 5,916-yard Sunbrook Golf Course in St. George, Utah. She won by eight shots over South Dakota State’s Megan Mingo.

Her 61 tied the best mark in NCAA women’s golf history held by Esther Lee of Colorado and Mariah Stackhouse of Stanford. Lee’s 61 came earlier this year during the fall season during the opening round at the Branch Law Firm/Dick McGuire Invitational. Stackhouse posted her 61 during the 2013 spring season in the final round of the Peg Barnard Invitational.

“Tying the NCAA record is truly an honor and I still can’t believe that I was able to do this,” said Pagdanganan. “This accomplishment would not have been possible without the help of my coaches and teammates who constantly push me to be the best player I can be.”

Pagdanganan opened her round with birdies on the first two holes and would post a 3-under 33 on the front nine. She birdied holes No. 10-12 to start the back nine. She would then birdie the 14th and 16th holes to get to 8 under for the round.

“Bianca had that look in her eyes all day and I could see she was going low with no thought of doing anything but going lower,” said Gonzaga head coach Brad Rickel.

Standing on the par-3, 162-yard 17th hole, Pagdanganan would use a 9-iron that would find the bottom of the cup for a hole-in-one and to push her score to 10 under. She would then birdie the final hole to finish at 11 under.


“After two great shots on 18 she drained an eight-foot putt and fist pumped with a 61,” said Rickel.